Device Guard and the enlightened scripting environments that come with it are a lethal combination for disrupting attacker activity. Device Guard will prevent unapproved code from executing while placing scripting languages such as PowerShell and the Windows Scripting Host in a locked down state. In order to operate in such an environment, researching bypasses can be immensely useful. Additionally, there are evasion advantages that can come with executing unsigned code via signed/approved scripts or programs.

While this addition reduces the attack surface, it doesn’t remove it entirely. While analyzing Microsoft-signed PowerShell module files for functions that allowed unsigned code-execution, “MSFT_ScriptResource.psm1” from the Desired State Configuration (DSC) module cropped up. This module is signed by Microsoft, and has a function called “Get-TargetResource” that takes a “GetScript” parameter: 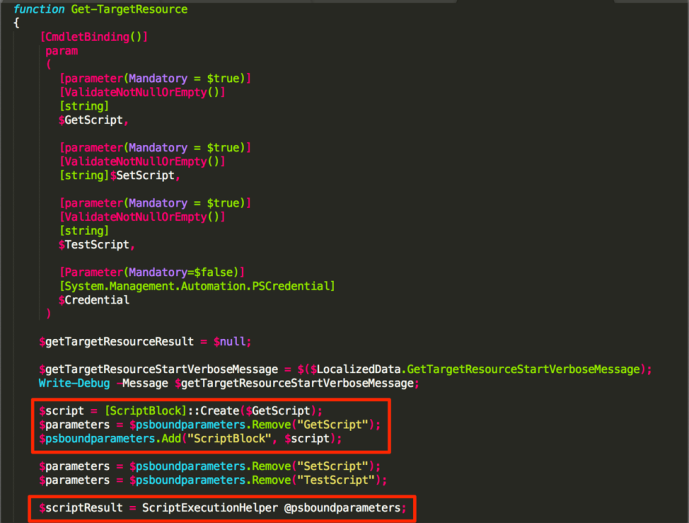 Looking at this function, the code passed via -GetScript is added to a new scriptblock via [ScriptBlock]::Create(). After doing so, it passes the psboundparameters to the function “ScriptExecutionHelper”.

If we take a look at “ScriptExecutionHelper”, all it does is take the psboundparameters (which includes our newly created ScriptBlock) and execute it via the call operator (&): 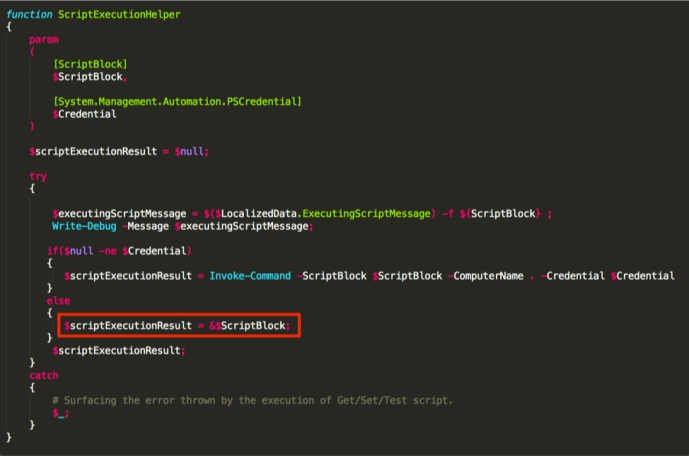 Since all of this is happening within a Microsoft signed module, the module is permitted to run in FullLanguage mode (i.e. without any restrictions imposed upon it). To abuse this, all we need to do is pass our malicious PowerShell code to Get-TargetResource via the -GetScript parameter. But, isn’t the Export-ModuleMember mitigation from CVE-2017-8715 supposed to prevent function abuse? Looking at the exported functions in “MSFT_ScriptResource.psm1”, the abusable function “Get-TargetResource” is actually exported for us:

Excellent! To test this out, we can add some arbitrary C# code (that simply takes the Square Root of 4) to a PowerShell variable called $code: 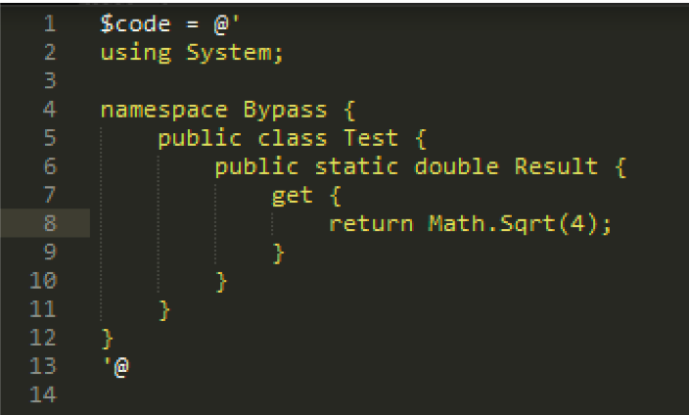 After doing so, we just need to import the “MSFT_ScriptResource” PowerShell module and call “Get-TargetResource” with “Add-Type -TypeDefinition $code” as the -GetScript parameter. When this executes, the Microsoft signed PowerShell module will be loaded in FullLanguage mode (since it is signed and permitted via the Device Guard policy), and the code passed to the Get-TargetResource function will thus be executed in FullLanguage mode as well:

As you can see above, we are running in ConstrainedLanguage mode and getting the square root of 4 fails as those method calls are blocked. We then add our “malicious” code to the $code variable. All this code does is take the SquareRoot of 4, like we previously tried to do. Once that is done, the “MSFT_ScriptResource” module is imported and our “malicious” code is passed to “Get-TargetResource” via the -GetScript parameter. When that executes, the Add-Type call is executed and our “malicious” code is executed, thus circumventing CLM on Device Guard. It should be noted that enabling ScriptBlock logging will still capture the CLM bypass attempt.

This bug was fixed via CVE-2018-8212. If you are interested, Microsoft recently added bypasses like this to the WDAC Application Security bounty program: https://www.microsoft.com/en-us/msrc/windows-security-servicing-criteria